Come and build experiences where creators and communities come together in the next generation of interactive social experiences. With the OZ Builder Kit, our Unreal Engine plugin, your imagination is the only limit. 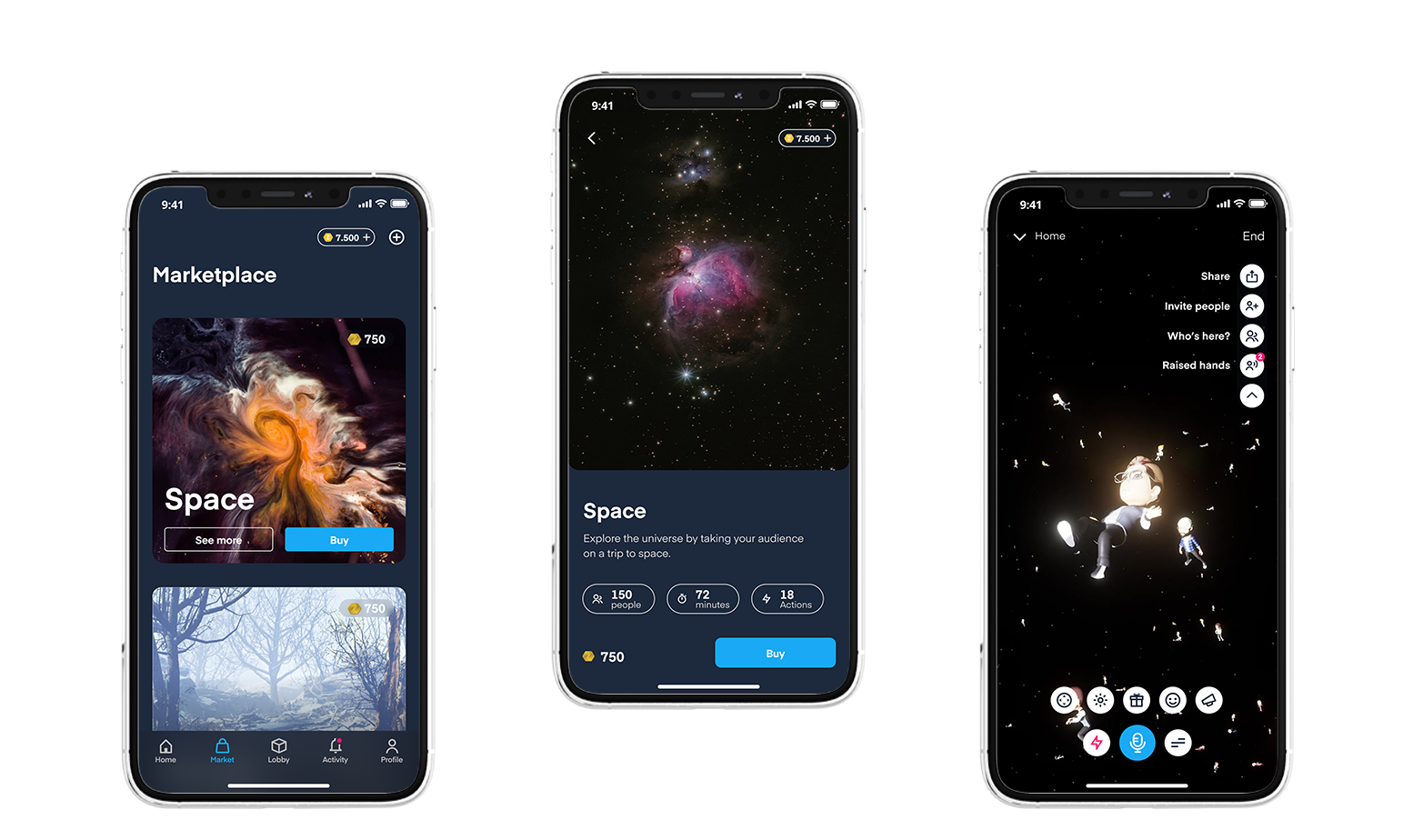 OZ is partnering with 3D artists and generalists of any size to build new exciting destinations for communities to feel transported, empowered and connected.

Imagine being able to build amazing free-to-play experiences with no need to worry about complex mobile app infrastructure hosting or user databases. With our OZ for Unreal Engine software (“OZ Builder Kit”), you can bring your creativity and vision to life. Build your destination, think of the best experiences that could happen there, and OZ populates the experiences with real users - as customized avatars of different species.

The OZ platform automatically handles the complex process of populating the worlds with personalized avatars and giving users the opportunity to become participants with intuitive user controls. Creators and communities are transported to a shared place where everyone participates. Some of the key unique features of the OZ platform are:

What can Builders build?

Distance, time and even gravity are no barrier to experiences in OZ. The only real limit is what you can imagine. You can build experiences of any length, from a minute to entire days where participants can escape to destinations like no other. Your experiences can be from the simplest 3D scenes up to large-scale complex worlds with sophisticated mechanics.

We welcome Builders to build experiences of any size, in any theme.

What can Builders build?
what-can-builders-build

OZ Experiences are classified as “participatory media”. From micro to mega communities, creators can launch experiences where the audience is engaged in a shared live stream via any connected, video-capable device or streaming platform. Any participant can influence and participate with the stream in real-time. The stream is a one-to-many broadcast, full of life and interactivity.

In today's world, most streams limit interactions between the creators and audience to a text box or reaction icons in a limited area of the video screen. With OZ, live streams can finally be two-way, interactive experiences, where the audience can jump in, rather than lean back! We offer the audience a way of entering the experience as participants, including appearing within the broadcast as their very own personalized avatar figure of their choosing.

Interactions are simple but powerful. Users can interact with the live scene using simple user interface controls presented to them based on the mechanics of the experience.

Each of the interaction options can be monetized easily with OZ’s in-experience currency, which supports micro-transactions, surge charging models and larger purchases as defined by the Terms of Use and our Free to Play Community Guidelines.

OZ is uniquely focused on putting participatory experiences in the hands of creators. From sports fans and gamers, to musicians and beyond, experiences in OZ are hosted by creators who can engage and connect their communities by taking them to brand new destinations. Creator-hosts can receive revenue shares, earning in line with how their communities spend within the live experience they host - one day with no barriers or special affiliate status required. Anyone will be able to launch an experience and start earning revenues under our free-to-play model.

And here’s the thing - Builders will also earn revenues from experiences they build! Participatory experiences uploaded to the OZ marketplace that are fun, engaging and encourage “in-experience purchases” can become hugely popular and repeated by creator communities across the world. We believe in deep collaboration and partnership with our Builders, and with our revenue sharing commitment, if you make incredible experiences, you make a killing!

A rich and entirely dynamic UI palette is used to connect the end-user with the participatory experience. The UI is simple to use yet very powerful and rich in features. Builders can map out the participatory interactions from their worlds using the OZ UI Markup Language to define the multi-level navigation and its actions. Each action can have distinguished in-experience purchasing options. This allows for the rapid development of fun and immersive free-to-play experiences.

At the core of the live-streaming participation functionality, the end-user has access to one or more of the "UI Palette Core Buttons". These are simple main menu buttons that can trigger immediate actions or enable a Step-based user flow until the selected step is reached. These are placed in a horizontal scrollable reel, which is placed in an easy-to-access fixed location, usually close to the base of the user screen. The Builder decides whether to design experiences with one Core Button or over 20, there is no mandatory Core Button arrangement.

The following outlines some examples of UI Palette Core Buttons for an experience - these buttons can be accessed and triggered on-demand by any user at any time during the live experience:

Appear. To join the conversation in a group talk and become co-hosts or join the stage to talk. Users can even get courtside seat placement or appear on mega-screens for VIP screen time.

‍Environment. To offer users to affect the live environment, with users able to influence the weather, the time of day and the environment colours - and even the camera movement.

‍Actions. Any user can set off fireworks, flares, drones, spells and other actions and signals visible to all participants of the experience.

‍ Gifts. To send gifts other users like adopting a dog, sending a flag or air-dropping some flowers by drone. Users can tip the host to show their appreciation with OZ’s virtual currency.

‍Avatar animations. To animate the user’s avatar with a huge range of fun movements, from basic actions like nod or shake head, to complex dances and celebrations.

Sounds. To add to live stream audio with user-triggered sounds, including claps, cheers, whistles, barks and musical sound-bites. Create a live stream ambient audio like no other!

Relevant icons can be selected from a wide range to best describe the group of actions that the Core Buttons represent in the dynamic UI. And if you don’t find icons you need, tell us and we’ll create more! Here are some examples of Core Button icons available for Builders.

When tapping each of the UI Palette Core Buttons, a secondary horizontal reel of Action Buttons appears to trigger various user actions. In addition, more actions can be easily purchased via the “+” icon within the reel, which provides the users with quick access to the OZ marketplace without having to leave the experience.

As experiences in OZ are always Creator-led, the host will have the ability to customize the experience both before going live and during the live stream. The Creator has access to these options via the following UI Palette Host Controls buttons.

Experiences. Launching from a catalogue of experiences or selecting from the OZ marketplace.

Host Controls. For triggering actions within the environment.

Examples of host controls could include:

The OZ UI Palette supports filters to better categorize a range of selection options and actions, when navigating the Core Buttons, Action Buttons and Host Controls.

OZ enables every user to be represented as a personalised avatar of their digital human system of choice. This offers Builders great new opportunities to build more immersive experiences with the virtual crowd and fun new visual representations of users. Until today, video streaming has been limited by just text chat boxes on the side of the video to offer participation from the users. This changes with the OZ platform, transforming live streaming into a two-way participatory experience with audio and visual representation to truly engage audiences.

Avatars also play an important role for creators and communities alike in enhancing the potential for self expression. With OZ, users can look, dress, move and act exactly how they would like - with no physical constraints or the intimidation that some users experience with live video.

The OZ Builder Kit enables you to place the users wherever you wish within the environment. Avatars are categorized according to the type of user (host, co-host, audience, special guest, etc) and can be easily moved within the environment, and even designated with movement for the experience. When the experience is launched, avatars are placed in the designated locations selected by the Builder, with a customizable order and prioritization logic.

Our OZ Builder Kit has been developed for use with the Unreal Engine, with the following key features: